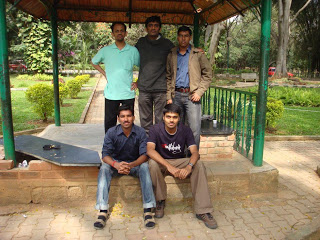 Hello all, well here goes the next dossier ( chuckle) from my side. The day started with 3 of us and two of us joined later. This time it was Karthik, Sudheendran, Tanoy, Aravindan and myself. It started with the usual hi hellos and an ever enthusiastic thirst of ‘expressing full out’ of every stammerer!! The time was scheduled at 10.00 A.M but our Bengalluru culture dominated and people drooped from 10.30!

This time it was Karthik’s anchoring and he had some new things planned up this week. It was just declared there that a play would be enacted and all of us just bagged roles and went on field!! ‘wow’!! Other than the regular sharing of breakthroughs and breakdowns, this was something spontaneous and it was really good doing the acts as it broke the monotony of the atmosphere and we got a good kick start.

The first act was a conversation between me and Sudheendran and the scene was that in a railway station. I was the ticketless hiker on the platform and Sudheendran the ‘Honest Cop’. Next it was between Karthik and Tanoy- the scene was that of a school master and an ever irritating ever complaining student! It was fun seeing Tanoy getting banged by Karthik for doing the homework in more than expected way!!

Arvindan just joined in and then we had this next play, play of the day- Behind enemy lines!! hahaha…I and Sudheendran took up the role of intruders, Karthik the senior BSF, Tanoy the havildar, Arvindan the ever alert soldier on guard! The play went on with a conversation and a little of laughter for about ten minutes. Hope they did have just accepted my basmati deal! The play was enacted with the intention of breaking the monotony and giving us full freedom to express and enjoy having conversations in a gathering.

Well it was followed by an extempore and a questionnaire round. We discussed about the various ways we all deal with our stutter be it hiding, masking or exposing. We never found any solutions but only acknowledged these things. Thankfully we did not have to chalk out any free advices nor any solutions as such. All we did was taking further the fact of ‘acceptance’ of this problem and “start living life”! At last we had a photo session and you can see the smart men of TISA Bangalore smiling there!!