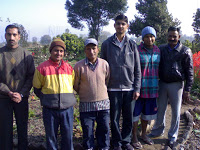 This sunday (27th Dec 2009), Nitin, JP and Kishore were also here. So, we started with mock interview, especially organised for Parmanand on his request. Then, the interview panel continued with others too- especially young students, Vineet and Aman. Panel observed afterwards, that students must learn their subject thoroughly rather than blaming their stammer. Also, that secondaries (on face) must be dealt with, since they substantially detract the audience.
Then, we had an intro round, followed by memory recall; two plays were staged by the two groups. It involved reading the script, team work and some acting skills. Later we all walked upto Mr Robert’s house to thank him to let us (TISA) use the hall in the day care enter meant for children with developmental disabilities. We also discussed Keith’s upcoming visit.
JP was here to help launch SMTA website and give a crash course to SMTA staff on website maintenance (pictures below). Kishore has just returned from Italy.