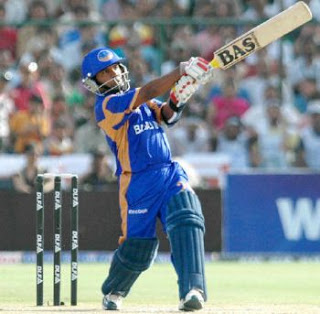 It’s IPL season once again! IPL season III will hit the grounds very soon. The waves of popularity created by this new cricket phenomenon that started 3 years ago, was enormous not only in India, but throughout the world.

I am sure everybody must have already started fancying their favourite teams’ chances in the season to come. My favourite team this time around, will be again – “The Rajastan Royals”.

This team emerged the undisputable champions in the first ever version of the IPL. Along with the emergence of this team, there was emergence of another name. It was Swapnil Asnodkar – a 25 year old, aggressive and hard-hitting opening batsmen, hailing from Goa!

He was not so tall… But his achievements in IPL-I stood tall. He chipped in with very quick 60s and 70s along with his other opening partner, Graeme Smith. This diminutive opener, with his aggressive and attacking batting helped Rajastan Royals with flying starts, which ripped apart the opponents bowling attack! It made him a big name throughout India no doubt, but he created tremors in his state Goa! Suddenly he was appearing in interviews on local satellite channels. On one such interview, which was aired by a local channel, I noticed that this super-star had mild stammering. On many occasions his stutter was quite evident. And yet he was talking very confidently to the interviewer. He sometimes got excited with his speech, but then was quick enough to get in control of the same. He repeated words when he stuttered… but he never got carried away with these speech interruptions. He never looked nervous when the speech interruptions came. It was really inspiring to see him talk to the interviewer and watch him manage his stutter and concentrating on communicating his message, rather then on his stutter. Much like his fearless style of batting, with his speech too, he was fearless!

Hence, Swapnil Asnodkar, is my cricketing hero not only because he hails from Goa, but also because of the great spirit and confidence he shows, despite his mild stammering. Yet another example, that stammering can never stop us from achieving our dreams!