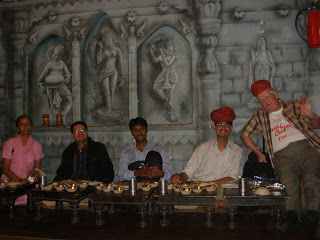 The day was 15th Feb 2010, and time was around 7:30 PM, when I first saw a man sitting in the hotel room along with Pankaj who went to receive him. As soon as I entered the room, the seventy something gentleman made an effort to get up from his relaxed posture, bent towards me and gave a firm handshake. That is when I knew that this man is on a mission and a NO non-sense person. Yes, he was none other than the charming young man, Keith Boss.

After exchanging pleasantries, we got to the business, ie: talking about stammering. Soon we were joined by few other folks, and the room was nothing less than a congregation of stammerers. We left together for a supper nearby. All along, the discussion was gripping.

Next day: 16th Feb, Jai Prakash (J.P.) had planned for Keith visit within his company premises, where the strength surprisingly turned out quite impressive. I am sure Keith must have provided some invaluable inputs for the eager audience there. In the meantime, we had some more visitors from Goa, Harish and Santosh. I went to the hotel to greet them and explained them the venue location for the meeting with Keith.
Keith finished his lunch in the same company and later joined others at the Desai hall at 1:15 PM. At the meeting, we had a reporter as well who was asking some very curious questions. Keith patiently answered all his questions. Reporter left early after inquiring his quota of questions. Later we had Keith all for ourselves. Here he took a piece of paper and read a poem wrote by a stammerer who was a cop, which was inspirational, to say the least. Keith later expressed his desire for a dark coffee sans milk and sugar. We could think of only one place nearby: Barista, MG Road. We decided to head straight there. This was turning out to be an adventure ride, jostling our way through the traffic. That said: it was fun. I did hear about “a lot can happen over coffee”, which did actually happen. The cappuccino coffee was not that great, but the discussion we had there and the aesthetics of the place pretty much made up for that grumble. Keith, however, seemed to enjoy each sip of the black coffee, which left him craving for more at the end. In the meantime, that evening we had Akash from Surat, joined us, along with his mother. I had to leave the place for office to do some pending work.

Later that night, I had the pleasure to meet Akash and his mother, and felt glad. Next day Keith again spent with J.P.’s company and gave speeches. The meeting for general public started little late, thanks to few communication lapses. I managed to seek my manager’s permission and left office early to attend Keith’s session. By the time I rushed to the venue, it was already 4:45 PM. apparently; I asked questions that made few in the audience laugh their arse out. Precisely, I asked about the effect of stammering gene, and how can it be activated? Is it possible that this gene activates when the person meets with a bloody accident in very young age, which is what had happened in my case? To this Keith gave his (late) wife’s example, when she was knocked off by a car on the curb, where they were standing. This led her to develop an ovarian cancer. This surprised us all, and we were left wondering what correlation an accident and ovarian cancer might have. Later, Harish stumped us all by his witty and courageous poem which he himself wrote. It was about the feelings of a bird that looks and sings differently from other birds, asking for recognition among its creed. Everybody was listening to his poem with rapt attention, trying to relate their stories with that of the bird. By the time Harish finished, everybody was visibly moved and acknowledged his attempt with a thunderous applause. I satiated my curiosity by asking Keith about the effect of stammering on dating scene, how much is it going to hamper our chances. I asked whether or not to disclose stammering to the would-be potential brides. To which Keith answered in a way as to indicate that honesty is still the best policy. Later we dispersed with a group photograph, wishing each other good luck, hoping to bump into each other sooner or later. I along with J.P., Akash and his mother, accompanied Keith to Chowki Dhaani, a rajasthani theme spot, to spend rest of the evening. Along the way we packed a gift for Keith as well.

Theme village had its own charm. I am sure Keith liked it. He got his head massage there, and later looked visibly relieved of stress. In an attempt to start an interesting topic, I blurted out to tell us Keith’s love story, to which he promptly agreed. I learnt few dating techniques and attitudes that would go a long way to make me a better stag. I also happen to ask him about belly breathing to which he replied that: when a child is born, he breathes through his belly, but as he grows, he develops a bad habit of breathing superficially and not letting the air through nostrils reach the belly. Belly breathing is helpful for many reasons viz: help purify the blood, which means a rich supply of oxygen helps kill germs in the blood, relaxes the upper body including the vocal chords, lower jaw and shoulders. Consequently, belly breathing is what stammerers need the most.

We came back to the hotel room where we talked for some more time. Keith tried downloading a meditation audio track onto J.P. laptop but thanks to the unavailability of iTunes, he was unsuccessful. J.P. wished to hug Keith while parting, to which Keith was most, pleased to oblige. Later, he turned to me and asked if I wish to hug him as well, as if he understood that I am being left out. I did not have a choice but to say “ok”, fearing that I could be smothered. However, that “jaadu ki jhappi” felt to be different. There was this special positive energy radiating from his heart, the warmth that I could feel. Never before did I feel this brotherhood and fraternity. I held him tight for some more time, just like a kid holds on to his father before leaving. That was one melodramatic moment; I quickly regained my composure and wished him good night. Before leaving, we made sure that Keith’s travel tickets and transport arrangements are in place. He saw us off with a broad grin and cheerful eyes.

Surely, our day was made. God bless Keith, TISA !