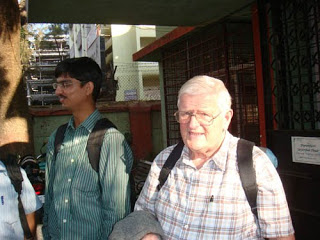 After a lot of yes and no… I and Santosh, finally planned our trip to Pune to meet Keith Boss. Sceptic about getting leaves from the workplace, Santosh suggested a very good way to do so – Just tell the boss frankly that we are going to work on our stammer. It really worked wonders! Both of us were able to get leaves, and off we were heading to – Destination Pune!

We both discussed a lot of things on our way to Pune. Both of us were eager and very much looking forward to what was in store for us during the next two days…

Amidst the bomb scares and security concerns, we walked on the streets of Pune on the wee hours of Tuesday, 16th Feb. Manohar was the first of the Pune SHG members we met. He visited us in our room. He was very amicable, had a smiling face, and talked as good as he could write. But he was just one of the many more of the enthusiastic lot that we met a little later.

We were at the venue by 1.20 pm. We met some more of the Pune-kars waiting at the Venue – Pankaj, Amit, Suraj, Vinay and Vipin. We introduced ourselves with everybody. The enthusiasm that everybody showed was awesome. Vinay had come with a bunch of pamphlets which he stuck on the walls of the premises. The build-up to the event was getting better and better with the kind of enthusiasm and zeal the Pune SHG showed.

JP and Mr. Keith Boss finally showed up at the venue. With a smiling face, Keith greeted us all. A reported from the press was also waiting for the proceedings to start. Keith didn’t waste any more time, and promptly got started. “I have impaired eye-sight – I wear glasses, I have impaired hips – I’ve had hip replacements four times, and at times I have an impaired speech – I stammer. But there are lots of other things about me that make me Keith Boss!” That’s how he introduced himself. That itself was an inspiring way to kick of the meet.

Keith started by talking about what is stammering and it’s causes. He strongly believed stammering is hereditary. He said that researchers have lately identified two genes that lead to stammering. Having the genes doesn’t mean that you will stammer, but it certainly makes you vulnerable, if something triggers it. He also spoke about the role of parents into developing stammering. He opines that unintentional interruptions while speaking to a stammering child, may pose serious challenges to the child at his learning stage. The struggle to make himself heard can make him talk without pauses, which can lead to stutter.

Keith then spoke about the role of society. He said that Stammerers are often underused by their employers. He also said that, PWS themselves may also end up refraining from contributing as much as they can because of their stammer. “You all are Indian Assets” he said.

He further said that no employer owes us a job. We have to make our own living. He gave various tips to be taken care during the interviews:
– Have a strong Body Language
– Be mentally controlled of yourself
– Have a list of all the things that you did despite your stammer. If asked about your stammer, talk about all those things which you did. “Yes, I have stammer, but I did this… and that…”

Keith then gave a 4-step route to get started on the way to recovery:
– Have a reason to change.
– Accept it’s alright for the people to hear you stammer.
– Know about the speaking tools (bouncing, prolonging etc). Keep them in your kitty.
– Practice talking with the speaking tools with the real world.

“Dictate yourself that you can do it” – is the kind of attitude we PWS should have, says Keith.

Later in the evening, we went to a coffee shop. Over a cup of a brilliant cappuccino, we again had a very good exercise. Keith told us the significance of talking by using techniques. We then had a round of each one of us talking in our techniques. Keith gave a feedback to each and everybody of us about how we talked. It was a round where we all had a lot to learn. On day 2, we had some more faces joining from Pune SHG. Also joining us were Akash Acharya, and his Mother from Surat. The day started by discussing the role of SLPs and their need.

We all then discussed about the role of SHGs in self help movements. Keith gave loads of ideas and things that are expected from an SHG. Keith believes an SHG should:
– Instil communication skills
– Leadership Skills
– Have an agenda
– Have roles (like Meeting co-ordinator, the Educator, etc)
– Create interest. Have outings, vocalize yourself, be a child.
– Event management. Organize events, or help people with other disabilities.

A member from Pune SHG, Mr. Sanjit Khanoja, also said that an SHG should cater to the emotional aspects of stammering.

The group was then heading towards a Rajastani Resort in the outskirts of the city. We couldn’t accompany them there, as we had to catch the bus back to Goa.

What we take back
In those two short days, there was a lot to learn. As we were heading back to Goa, we were going back as a different person. We have taken loads and loads of lessons while we return to our homes.

We learnt that we should always talk speaking with techniques. This creates good speaking memories, which we should think of at bad times. This will help us in bouncing back.

We also learnt the “Philosophy of Positivity”, which Keith defines as, “Converting your negative thoughts to positive ones.

Another important thing we learned was the importance and necessity of “Avoiding the Avoidance”.

We learned that there are 2 styles of speaking – Medial and Lateral. One should practice speaking in the lateral style, in order to start melting the stammering ice-berg, advices Keith.

He sometimes bounced, sometimes prolonged and sometimes stammered. But he always loved talking. Along with the loads of knowledge that Keith offered, I also had a pleasure to meet Mr. Akash Acharya and his Mother who had come all the way from Surat. He is one of the core-members of TISA, and I was glad about my first meeting with a core-member of TISA. There was a lot to learn from Mr. Akash too. We discussed a lot about stammering and talking to him and his mother was very nice and pleasing.

Finally, we take back to Goa, some more friends in the stammering fraternity – The Pune SHG members – Jai Prakash, Manohar, Vinay, Vipin, Amit, Suraj, Bhaskar, Nitin, Sanjit, Pankaj (I hope I haven’t missed any name). Guys, you all rock! Keep up the spirit.

Santosh, thanks for motivating me to attend this meeting by talking frankly at the workplace, and for being there throughout the journey as a caring elder brother.

The Pune odyssey was a life time experience and one of its kind. My sincere thanks to TISA, Dr. Sachin and everybody associated with organising this event. It has done a ton of good for the PWS.