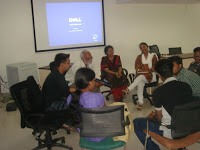 we started of the day by getting up early. We did some karate kicks, blocks and punches. For once, Sachin sir took a back seat and each one of us got a chance to preach different types of breathng and meditation techniques. we also did an interesting excercise of thanking God for all the things which we think are blessed to possess. The person who makes the maximum thanks’ list is the winner.

We had a quick breakfast and freshened up. Later we headed straight to the Medica ENT hospital to conduct stuttering interviews. I interviewed the receptionist (was time pressed as always). Nilu interviewed Ms. Pooja (see picture). Sanjit interviewed the Senior doctor and discussed with him about the starting of the SHG and how it benefits us. Vivek also interviewed an anonymous staff member :).

Later we returned to the conference hall and played a game: “take your time”. where-in each member can ask any one, any question, to which the responder is supposed to answer after taking his/her own little sweet time.

Dr Sachin then explained about the last coping technique among the lot: Pausing, besides bouncing, prolongagtion and voluntary stuttering. In the meantime, a young PWS joined us along with his father and Dr. Durba Chatopadhyay.Sachin sir tried to counsel him and requested all the workshop members to give one coping technique per person. I informed this young PWS that i try to imitate the film actors of english films in real life. This started a series of discussion of how can this be of help. Young PWS was requested to perform a parody of Mithun-da, which he excelled at.

Then the father was asked whether he is overly worrried about his son’s speech problems, to which he replied “very much”. Sachin sir then asked him to stop immediately, and never ever show your son that you worry about him so much, because if you do so, the son will come in immense pressure, which is bound to aggravate the problem.

We then started a round of introduction as requested by Mrs. Sweta, using the techniques we learnt. Also Ms Durba C spoke about the various speech technique which she advises her subjects to follow.

We had a quick lunch, after we started off with the stuttering interview debrief. After each person has presented his/her experience of the activity, Sachin sir threw a question in the air: “how is the listener supposed to react when s/he is confronted with a PWS?” we had discussion that can be summarised as follows:

1. maintain eye contact
2. Slow yourself down
3. Be patient
4. Do not conclude the sentence for the PWS/Do not interrupt

Later we watched the movie: “Front of the class”, Some of the catchy quotes that i felt worth mentioning here are:
– “I never had a good teacher, the best teacher i ever had was the Tourette’s syndrome”
– “It is ok to be different”

Later we reviewed the movie where each person narrated his/her own learnings from the movie. We played a game, also can be called as Antakshari, except for this game having the names of the places rather than songs.

Later we again watched a short documentary that shows the feeling of PWS, when they are growing up, how and why some therapies work/don’t work at some age etc.

Signing off for the day…..