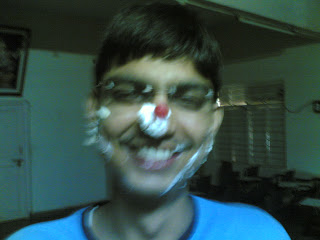 The Pune SHG meeting this sunday was very interesting. We had fun and enjoyed as much as we could. JP had already planned to give us Treat, as it was his Birthday on 22nd July. Although I wished him on that day too but sunday was special. It was raining very heavily from the last 6 days and still was raining with no hint of sun shine.

Our meeting starts at 10:30 am but due to heavy rain and traffic, I was about 25 minutes late(sorry for that). Till that time JP,Chris and Rahul had already started meditating. I removed my shoes and sat down on the chair very carefully so that I don’t disturb them. Then I also closed my eyes and started meditating along with them. After 5 minutes, when we opened our eyes, Sujit was also sitting in front of us. Actually Chris took some time to come out of the meditating state. And it was really good to watch him going so deep in his mind and we all remained silent till he opened his eyes.

Most of the members couldn’t make it because of the heavy rainfall.So with 5 members this time, we had a round of slow reading where we were suppose to pause after every three words. In this round our patience was tested.Because everyone was trying to speak the whole sentence in one go forgetting about the pause. After that we began to play a game in which we had to frame a sentence and the next person had to make a sentence rhymed with the previous one just like a poem. This round was very interesting.After this we had a round which was similar to Extempore. Each of us had to suggest a Topic and anyone can choose any Topic but the same topic cant be chosen twice. The topics were very interesting and we all had to speak for at least 4 minutes on the topic we selected.

Then came the time for celebration. JP himself had brought the cake and we all sang the famous “Happy Birthday to you ” song for him. Then we all ate some of the cake and the rest
of the cake was as usual put on his face. It was the perfect Asian paints moment 😀 After that it was Treat time.We all went to a restaurant where we had a delicious vegetarian Lunch as it was a vegetarian resto 🙁 . Our lunch went on for about an hour and a half. After all we were discussing many important things. This was all about our meeting.

JP and I also have an experience to share which was more like a nightmare to us.Stay tuned for this Nightmare.