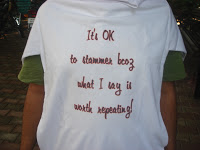 This Sunday we all met yet again, but this time we bid farewell to two very prominent members, viz JP and YR. The strength this time was quite impressive. We discussed about whole lot of things and cracked many jokes too. Amit told about his new company and his ordeals with the trainings. Praveen was all praise for the efforts put in by JP ever since he revived the Pune SHG from dormancy. YR was leaving for Delhi and she is now engaged and going to marry next month. Sujit listened to the proceedings with rapt attention. Meanwhile Suraj joined and told us about his next adventure plan. Rupesh then enlightened us about some spiritual gyan emanating from Osho etc. Mahesh was playing pranks most of the time during the meet, but nobody seemed to mind. Sanjeet also spoke a lot and wished the departing parties good luck. To conclude this meet on high note, I presented JP with a white T-shirt (with stammer quotes) as a token of appreciation for his contribution to Pune SHG.

Meanwhile JP threw an idea that we should include our girlfriends, spouses, mothers and fathers too in the SHG meets. This will help all of us to understand stammer related issues more objectively. That is when Pravin offered to invite all of us to his house for a cup of tea. To save Pravin’s wife the pain of cooking food for all of us, we decided to eat in a hotel and then leave for Pravin’s place, which is what we did and embarked on a fun ride.

And THIS was when hell broke loose.

All of us like kids started screaming and riding bikes like there is no tomorrow. We all had to assemble at Katraj which is a far cry from the SHG meet’s venue. We promised to stick together throughout the ride but unfortunately some of us lagged behind. Later, after a lot of phone-calling and clarifying, finally all of us managed to reach Pravin’s residence. There we greeted Pravin’s lovely daughter and pleasing wife. Both of them welcomed us and we were all touched by their hospitality. After having tea and some biscuits we started talking about the recently concluded workshop. JP started sharing and explaining about the various presentations, group discussions and photos on his laptop. People who could not make it to the workshop were ruing about their inability to attend the event. I then pacified them saying that TISA will soon organize a workshop.

After saying bye to Pravin and Family, we started our return journey, but this time we were in a strange hurry to make home soon. Guess part of the reason was that it was getting dark. Along the way, Sujit and Rupesh dispersed. Mahesh, JP, Manohar, Amit and YR halted near a church to attend the mass for a very brief moment. Gradually we all had to disperse saying and wishing each other a very best of luck.

I wish such outings and family interactions are conducted more often.