Golmaal 3 – Or should I say Tod Maal? 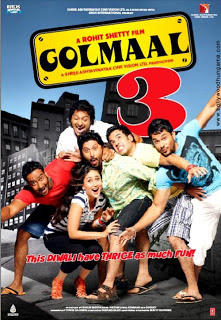 Rohit Shetty is back again with the third version of his Golmaal series. The promos did give a clear indication that it would again be that “forget-your-brain-at-home” kind of movie. But are the audience that stupid? Or is the Director stupid? Golmaal 3 is a clumsy effort of making people laugh… Sheer waste of money and of course – talent!

Shot in Goa, the story revolves around two notorious groups of siblings – Gopal [Ajay Devgan] and his brother Laxman [Shreyas Talpade] and their best friend Daboo [Kareena Kapoor], and Madhav [Harshad Warsi] and his two brothers, Laxman [Kunal Khemu] and Lucky [Tusshar Kapoor]. They incidentally end up starting the same kind of business financed by two different underworld gangsters [Johny Lever and Tiwari] and in trying to outdo each other, find themselves in serious quarrels which are supposedly funny!

In between the quarrels, the Mother [Geeta – Ratna Pathak Shah] and Father [Pritam – Mithun Chakrawarthy] remember their 30-year old incomplete love story and decide to marry. The marriage invites more (to audiences’ dismay) quarrels… and the rest is… no not history, but forgotten.

Claimed to be a laugh riot, Golmaal 3 seems to rely upon cheap comedy like tumbling cars, breaking stalls, shops and glasses, pants falling down and slaps. The dialogs also look like they have been borrowed from a book of children’s jokes or comics -“Jiske ghar sheeshe ke hote hai, woh basement mein kapde change karte hai” and referring an aged man as “Doobti hui Titanic”… to mention a few.

During the entire movie I could only see things breaking and cars flying and bursting and people thrown in the air as if they are made of paper. In fact there is nothing that is not left broken in this movie. They didn’t even spare the fingers! The movie would have been better named if it was called – Tod Maal.

Of the cast, Ajay Devgan and Harshad Warsi are the most noticeable, but yet they can perform little apart from shouting aloud. The other lot of actors are all great actors, but they have very little to show their talent. Even the veterans- Mithun and Ratna Pathak Shah are wasted. Technically, the kinds of stunts shown are seen a zillion times in Hindi movie. The story- well there is none! There is certainly a better way to make people laugh! You don’t need to break tens of dozens of cars and tens of stalls. If you don’t believe me Mr. Rohit Shetty, then watch Golmaal by Hrishikesh Mukherjee and learn a lesson or two about quality humour.

In the pretext of mockery on stammering and disabilities-
We know a public litigation has been filed against Golmaal 3 for it’s mockery on stammering. And the decision stands vindicated. To give a glimpse, the PWS is referred to as the “Speed-Breaker”. The mockery still continues with dialogues like – “Jab cricket khelne jayega, toh 20-20 ki jagah 200-200 kehlega” and “Doosra toh bo-bo-bo-bo-bolte bolte shaadi ho jayegi…”.

The mockery is also towards dumb people. What effect are we trying to have on children’s minds when an aged person is referred as – “Doobti hui Titanic”? All I can say is – Grow up!!

With regards to the petition, I was looking for any apologies during the screening of Golmaal 3. All I could notice was an usual disclaimer – “All characters in this film are fiction and blah blah…”. And another one that says – “The dog used in this movie is a dummy, and no cruelty is commited towards any animal….” It’s amazing how the director and the producer are more worried about animal cruelty, and are not even concerned about humans disabilities, its mockery and the impact on their minds! Well, atleast he has made all the dogs happy!
Share this
0 likes
Related Articles
2 Comments