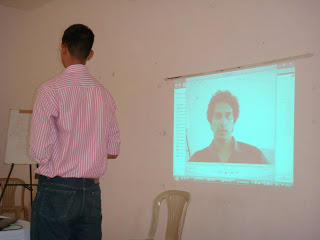 Day 2 of the workshop, started with an activity where we stood in a circle, and threw the pen to any participant. The participant to catch the pen would share any activity / session he liked most about day 1. Many of us talked about the puppet show, few talked about the acceptance videos and sessions, about Dr. Farida’s “3 A’s Session” and some spoke about learning new techniques.
We then got started by playing the videos which we had shot yesterday during the interview-your-partner activity. Jai played the videos and then sought opinion of the speaker, and then spoke about a few observations which he noted. Other participants also spoke about some of the things they noted in the videos.Jai then introduced us to “Voluntary Stuttering”. We saw a few videos from the documentary “Unspeakable” and how the stutterer there practices voluntary stuttering. We then practiced it with ourselves first. Then it was time to go out hunting for people to practice it in real world.We went into a near-by mall. We divided ourselves in 5 groups of 3 or 4 each. Each group had a leader. Jai demonstrated voluntary stuttering first with a young guy in the mall. Then the groups split to try and experience voluntary stuttering with the people in the mall.Back in the hall, we shared our experiences. One participant said that he was brave enough to try it in different languages he knew (English, Hindi and Konkani). Some said that they chose to approach people whom they felt were comfortable and some chose people who they found were intimidating. All of us then started introspecting on the activity. We discussed the reactions that we got. A few interesting things which were shared were: One Rickshawala said stammering happens due to TB or Polio! One lady gave an example of a lawyer she knows who stammers but can argue very well in court. Another person shared a story of his friend who overcame his stutter, while a young girl said it’s just that we all are different kind of people, and one should move on in life and achieve their goals. Many of the people thought that Stammering was because of nervousness.Post lunch, we had a session by Mr. Amey Hegde, a Behavioural and Motivational Trainer who has been with us for the workshop to learn more about stammering. He talked about the significance of “wanting to do” anything in life. By showing us two scenes from hindi movies (Saajan and Ishq), he explained us concepts of having an attitude of gratitude towards life, and having purpose in life.Jai then had a session on Cognitive Distortions (negative perceptions). Again we formed groups and discussed about our perceptions towards stammering, before attending the workshop, and the perception now, and the change we are experiencing. We all gave presentations of the same, which were video-shot and then Jai played the videos again on the LCD projector, and we all reviewed videos again as we did at the beginning of the day.A few press-photographers also clicked photos. Jai will be speaking with the reporter tomorrow.We also played a few interesting games, before we had a Q/A session and call it a day.(Photo 1: Jai helping us with Video Reviews. Photo 2: A behavioural and Motivational trainer taking a brief 45-min session.)