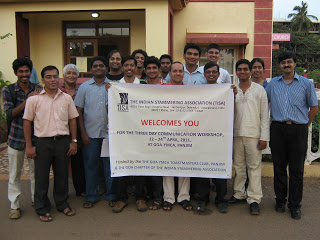 As Goa celebrated Easter, we started the Day 3 of the workshop with a communication game. We had to complete sentences by using the techniques like bouncing and pausing. We had several rounds, and some of the sentences which were given were – “If I was a cartoon character, I would have been ….”, “If I was God now, I would ….”. Then as the custom goes, we had the recap session. In the first round, we had to mention one activity we covered on previous day, till all activities are covered. In the second round we had to speak about the activity we enjoyed the most. Jai kept us reminding that while doing this, we had to use bouncing, pausing, prolongation and whatever technique we were comfortable with. Then it was time for a movie. We all sat back on our chairs, the curtains were closed and Jai played the movie “Unspeakable” on the screen. This documentary was produced by John Pascovich, a documentary film maker and a stutterer, who challenged himself at various levels while producing this movie and the movie shows his journey as he started by taking baby steps, and then marched ahead to even go and speak on a radio station about stuttering. We all enjoyed the movie and drew inspiration from it. After the screening, we had a very qualitative analysis and discussion about the movie. Everybody of us, including Dr.Farida and Mr. Amey Hegde shared their views about the movie. Post lunch, it was time for a group drama. We were divided into two groups. We had a script ready. Both groups had to enact a play with the theme of IPL Bidding. Some of the roles that we had to take were that of the Anchor of the Bidding, Lalu Yadav, Naradmuni, Vijay Mallya, Cricket players and since the two female-participants were absent some of us also had to play the role of Cheer Girls. Both groups enacted the play with sheer passion and enthusiasm. Some of us really had great acting talent which showed when the videos of the play were then played for a review. The most loved characters at the end of this activity were – Vivek and Anil as the cheer girls. We had a hearty laugh when we saw the videos of the drama again. Then each one of us shared how they felt when they were playing a role of someone else during the drama. Then it was time for an informal session to display our talents. Harish performed a mimicry act where he sang the film song “Kuch kuch hota hai” but in 7 different styles of playback singers. Vivek also had a mimicry item where he mimicked Shatrugan Sinha, Mithun, Om Prakash and another veteran comedian of yesteryears. (Name not known) Then we had more communication games in which we had to say a sentence which rhymes with the previous one. We had two rounds, and some of us came with really funny sentences. In another activity, we had to speak one (or more) positive things about other participants. As a concluding session, we saw a video of Eckhart Tolle, and discussed about his thoughts, and also how he talked. Jai pointed out how he talked by pausing in between words and sentences. We also talked about the kind of a feeling of trance we experienced when we listened to the video. We then had a feedback session, where we all talked about how we could improve in the coming workshops. Many of us said that they would have liked more outdoor activities like we had Voluntary Stuttering in the mall. Jai also talked the significance of SHG, and how we can all try such things again and again when we meet in SHGs. On an ending note, Jai played a video which demonstrated two techniques – “Pull-out” (speech modulation) and “Prolongation” (fluency shaping). We then exchanged contacts, emails and other details and promised to be in touch. This workshop introduced TISA and self-help movement to many more people in Goa. We also got to know more people from near-by states – Anil from Mumbai and Vivek and Mandar from Pune. Many thanks to JP for all the hard-work he has put into this. Dr. Sachin for all the guidance and motivation. Vivek and Anil for sharing a few things about previous workshops, Mandar for his enthusiasm to travel all the way. Dr. Farida for all the help with logistics and innovations (like hand-out folder and participation certificates) and media coverage, and also her session. Mr. Amey Hedge, a Behaviour and Motivational trainer for volunteering to give a superb session.