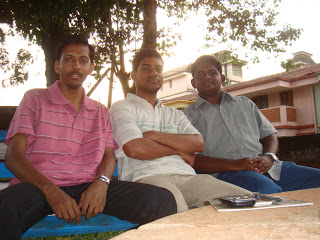 Harish, Rahul and I met at Nehru Park in Margao for the weekly SHG meet which was my first. It was a pleasant evening and sitting under the tree really refreshed us. Harish had prepared an agenda for the meet which included introduction and speaking rounds with bouncing, giving testimony of the Goa workshop by using any of one technique, catalogue our stutter and discussion on how to deal with our stammering by making commitments. We started with our introduction round using bouncing technique. Thereafter in speaking round each of us had to asked question to one another. Harish started first by asking if we were made the coach of Indian cricket team then what will be our strategy and each of us had our own plans. After all, everyone likes to be associated with a winning side. Initially we used bouncing technique and later on used pausing in between our speech. Apart from what we say, observations and introspections were done on how we say and mistakes were brought to the notice. I asked them what they will do if they win 5 crores rupees in KBC and I could see big smiles on both the faces. Imagining of winning such a big amount really takes us to a dream world. We all shared our dreams to one another in bouncing style and had a hearty laugh. On Rahul’s question, I jumped to answer first since it was on favourite topic – tourist spots. I briefed them about my favourite tourist spot – Hampi. Harish told us about a place Yana in Karnataka while Rahul said he loves Ganapatipule and Mahaleshwar. Apart from our speech analysis we also gained a lot of information about these places and desired to visit those in the near future. Next for giving testimony on Goa workshop, Harish went with voluntary stuttering technique and he briefed us about his experience while I and Rahul chose to bounce. To assess our stammering secondary behaviours we used mirror to look into ourselves while answering questions and noted down our secondary symptoms. I found my lips muscles being stiffened to be taken care of while Harish wanted his twitching of nose and clenching of jaws to be worked on. Rahul’s secondary symptoms were hardly visible. A general discussion was then done on PRE Block, IN Block and POST Block technique usage to overcome our speech blocking moments. Before leaving we planned about conducting an SHG meet in Panaji so that our north Goan friends may also participate and benefit. We concluded our SHG meet and the three musketeers left with happy and relaxed minds, looking forward to share our moments again. – As Reported by Babaji Redkar. We welcome him to his first SHG Meeting !