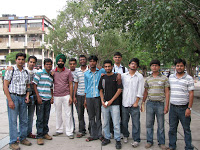 The 3rd day started with a 45 minute meditation in complete silence.The aim was to give some rest to the speech organs which had been excessively used in the 1st two days of the workshop.Then the stuttering ice-berg was explained that how the visible aspect of this disability forms only about 5% and the major part is the emotional part.All of them then drew their own stuttering iceberg and shared it with the group.Then everyone spoke their feared words without any technique so that their true stammering could be video recorded and then shown to them.Two non-stammerers were also invited(one was Rikiret’s mother and other was a friend of Jai) who interacted with he participants to tell them about a normal person’s perspective towards a stutterer like how they feel and why they react the way they do when they talk to a stutterer.Then we played a little game(my idea actually) in which each person was given a chart and every other person was to anonymously write a positive comment about him.The person could see the chart only after everyone had written their comments.This was kind of a token evryone got out of the workshop which they could take home.Finally we again went to the sector 17 plaza and took our acceptance to a new level.One by one a participant stood a little apart from the group and answered the group’s questions using bouncing in a very loud voice and also saying that “Yes,I stammer.”This attracted a lot of attention and may people started inquiring about the activity.Jai was quick to respond and explained them about this disabil.ity and together we spread a lot of awareness on this issue.All of us, Happy and Content, bade good bye promising to keep in touch with each other not before thanking Jai for his efforts.
Share this
0 likes
Related Articles
4 Comments