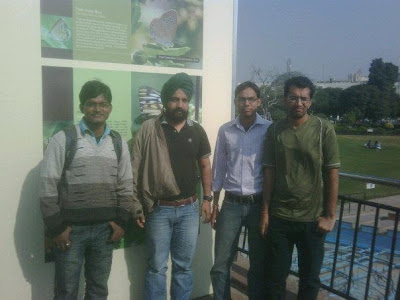 Delhi SHG once again had a memorable meeting on last sunday. Pramendra and Abhishek had organized the meeting. Earlier I wasn’t sure whether I would attend it or not but Abhishek brought my favorite thing ‘Sattu’ (a special dish of Bihar and Jharkhand) from his village so I just could not stop me from going there. Reaching there I heard Pramend and Umesh are not coming due to not being well. There were only Abhishek, Pinakin and Saurav. The meeting started with introduction. Everyone had to speak on a topic ‘Dowry System’, ‘Sati System’, ‘Jaativad’ and ‘Honour Killing’. Everyone spoke on the topic for 5 to 6 minutes. Later, an new idea struck to our mind that let’s do a new activity “Mr. World Contest”. There were three role a host, juries and contestants. One member was hosting the contest, one was contestant and rest of us were juries. I looked like very real. We all did the role of a host, jury and contestant, turn-wise. The real questions were raised by jury and contestant gave the correct answers. It was a new experience for us. We were nervous and had no control what hwe were saying but It was really a good activity and gave us confidence tat we can take part in Mr. World contest, someday….:) After this activity, we did the role playing, my dialogue was from Film Dharkan and Pinakin and Saurav played the roles. Saurav’s GF has become the GF of Pinakin. Later, he came to know she was the Girlfriend of Saurav. Guest appearance of the GF played by our Abhi. Abhishek also played the role of a Hindu boy who is in love of girl of another community and he is trying to convince his parents for marriage. After the meeting got over, we went to Jantar-Mantar to see all party debate with Anna Hazare, while returning we were playing the role of Media person and asked question to one another about Anna ji’s anshan. Overall, it was a great experience for us. RegardsSikander Singh
Share this
0 likes
Related Articles
8 Comments