2nd DAY OF SHIMLA GET TOGETHER 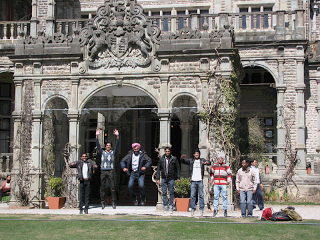 In the IIAS we saw the building built by Britishers to rule the Indian subcontinent during the summers, in which 400 people used to work and out of which 40 were gardeners and the most exciting thing was the table where partition was discussed and decided between India & Pakistan .There we met Vinod another stammerer who had come from Solan.
Then we had a cup of tea and an introduction round with Vinod .Then a bouncing round in which we had to bounce on color name, which we see around us. Then we decided to go to ‘ Kufri ‘ . We hired a taxi and went to Kufri .then we had an activity in which we had to share a joke or shayari.In kufri all most all of the tourists were taking horses to reach the tourist spot but we decide to go on foot and have some fun(And also because we couldnt afford horses 🙂 ) .

We enjoyed the journey ,walking off road through the mountains , throwing snow balls on each other . We were back from the tourist spot by evening and we play antakshri and we all sing songs and went to mall road after that . Enjoyed the beauty of mall road . Then we were very tired so we went back to the guest house . There we had a discussion round and took feedback from all the participants about the the whole ‘Get Together ‘ . After that we had dinner , and had some more discussion till late night.