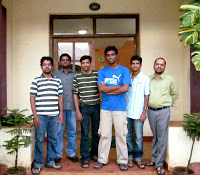 “Rain rain go away… little Johny wants to play”. The rain
Gods did hear the prayers, and this Sunday evening in Goa was pleasant with no
heavy showers. It was a perfect time for an SHG meeting. We met at YMCA Hall in
Panaji. We welcomed three new members who attended the meeting for the first
time-
Sankalp Jangem
Dnyanesh Kenkare
Siddharth Surlakar
Sankalp is an Electrical Engineer and an MBA aspirant.
Dnyanesh has just answered his graduation in Pharmaceuticals, while Siddharth
works as in IT Executive in a private company.
Rahul and Rajan also joined in, and we were a group of 6
including me (Harish).
Since many of us were meeting for the first time, we had
brief introductions and then sharing of stories. Sankalp, Dnyanesh and
Siddharth shared their stories and Rajan, Rahul and I followed.
We then had practice rounds, where we practiced Bouncing,
Prolongation, Pre/Post/In-Block correction techniques. We also discussed the
difficulty in applying techniques in real life and ways of getting over it.
Everybody contributed with very nice ideas and thoughts.
Then we had an activity. We had an award ceremony.
Everybody had to decide what award they have got, and give an acceptance
speech.
After each speech, the rest gave feedback to the speaker highlighting
his strengths and areas of improvement.
Rahul then suggested another activity of mock interviews.
We took rounds and faced interviews (job-like interviews) from the interview
panel (rest of us).
In the end, we had a casual discussion as always. It was
a very happy moment to our group to welcome three members on a day, and to meet
ever enthusiastic Rajan and Rahul again in the meeting with the zeal only
getting a little better!
Share this
1 like
Related Articles
3 Comments