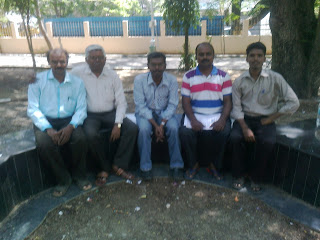 The Chennai SHG meeting held on
30.06.2013 at Anna nagar Tower park were attended by 5 pws namely Gnanasekaran,
Karthikeyan, Prabu Francin, Karunyamurthy and Manimaran.
First of all thanks to Gnanasekaran
who has organized this meeting. No formal introduction was required as we know very
well each other’s. Before the commencement of meeting Gnanasekaran informed
that everyone must speak slowly throughout the meeting.
Gnanasekaran brought 20 extempore (to
be spoken without preparation) topics. Each one had  spoken on 4 topics and also we had
discussions over the topics. We noticed one common thing among all the 5 pws.
Though we spoke slowly throughout 3 hours, but everyone stammered a bit initially,
when a question was thrown at him very fast. But later on we adjusted to fast
questions thrown on us and answered slowly.
I felt really very calm and also
spoken stammer free throughout the day after 3 hours of slow speech practice. I
also get the same feedback from others also. Slow speaking for few hours itself
is a speech therapy.
I suggest other SGHs also to try this
slow speech throughout the meeting and observe yourself whole day.
Share this
0 likes
Related Articles
2 Comments