Stammering .. Disability or Not??..let us re-consider our views. 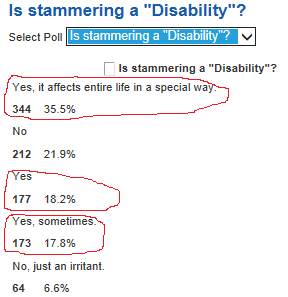 Guys I have written an article to support stammering as disability.These are my personal beliefs and and I used somewhere critic language.So ..please dont mind…Next time writing any post I will be more polite.
Pls give your valuable replies in Comment box.
A section of stutters agrees being branded as disabled as they are able to benefit from it, where as other section do not agree as they do not feel good to get recognized themselves as Disabled.

I am writing this article to support stammering as disability.Initially I was against to be called as  “Disabled.” Then I thought in wider perspective. I realized that it is needed to declare stammering as  disability.We can give a speech on positive thinking ,body language or have an positive idea about our  stammering .But when we talk about all these things, we actually talk about a few PWS connected to TISA like  SHGs and who are mild stutters.There may not be a recognizable connection between success and  stammering but its only true in case of mild stuttering.Let us think in broader perspective. We are 700-800  PWS, if we combine both TISA and Yahoo PWS group, In which hardly 200 PWS are active. In an  estimation about 1 Crore stutters are there in India.  If we compare this number to our active members than  its much high. We should take any decision taking care of majority. The PWS who are not attached to any  SHG movement living a mysterious life thinking that one day someone will come to hold their finger .They are  not so internet friendly to know about our group. If we talk about awareness than it will take long-long time to  do that with our limited resources. In this time period lakhs of our stutter friends will die in darkness. Making  one life better is making whole humanity
better.This attempt is not for reservations but it is to demand some  legislation to stop discrimination in different level. We should raise our voice infront of government to make  some  legislation and protocol to stop discrimination.

A person who has polio in his one leg has given reservation by government .Because He is not able to apply in Army like jobs or in those jobs in which it needs running or walking.If government would not give them reservation then he would be left behind from main stream and it will be violation of human rights too.Even He can do better in jobs like IT ,call center or banks etc still they get reservation.If we consider case of stutters, same conditions are applied to us too..even we get torcherd in so many ways by society that a person with disability other than stuttering wouldn’t.Our case is serious than that of the person affected by polio.
Before going to further in this article let us have a look on  definition of Disability.

“
Disability is an umbrella term, covering impairments, activity limitations, and participation restrictions. An  impairment is a problem in body function or structure; an activity limitation is a difficulty encountered by  an individual in executing a task or action; while a participation restriction is a problem experienced by an  individual in involvement in life situations. Thus, disability is a complex phenomenon, reflecting an interaction between features of a person’s body and features of the society in which he or she lives. Mental  disorders (also known as psychiatric or psychosocial disability) and various types of chronic disease may  also qualify as disabilities.”
I         If we consider above definition that stammering can be assumed as Disability.
1)The Americans with Disabilities Act

some other Acts in world that consider stuttering as Disability.

Some views of  the people are written below on which I replied.
View  1:  It depends on individuals Perception or opinion  either  they consider it as disability or      not.
Reply : Let us talks about facts not about opinions.
2+2= 3,4 or 5 are opinions but 2+2= 4 is a fact .
Any physical or mental impairment or disorder that is INCURABLE and affects our daily routine work partially or completely is considered as disability.We can mention percentage of disability  but technically and logically stammering is disability.
View 2: I dont think declaring it a disability will change the opinion of the society in any way.Even after declaration of stammering as disability a PWS will be discriminated.
Reply : How my friend ? Now a days a company can fire a stammerer giving an excuse that he/she was not capable of doing the given task.we can not even appeal against it.After declaring it as disability government will have to make a legislation about it.After that A PWS can appeal against these type of cases.Although some companies have their own policy to take care of discrimination cases but they are not bound to that and most of these policies are only in black and white.
View 3:You said that In so many cases society rejected a stutter as marriage material due his/her stammer. So a girl will marry you if you get a disability status? Again look another opinion poll non-stutters.62.32 % normal public ALREADY consider stammering as disability.When a girl marry to a stutter she already know that stammering could not be cured.She know that whom she is going to marry will stammer throughout his life and vise-versa.

Conclusion is this people already know that stammering is non-curable so there will be no recognizable effect of declaring stammering as disability.
View 4: All u can get from all this is a govt job to be frank,private companies still wouldn’t hire  you or promote you,people will still at laugh.I will favour spreading awareness and helping PWS  like TISA.
Reply: Let me clear ;

1)      All this is neither for personal benefit nor for Reservation.This all to avoid discrimination . It will be our stand in front of government to avoid discrimination.after that it will be up to government how it made legislation about it.If a PWS get a job then it will put him in safe side only.Still awareness will be important because private companies still wouldn’t hire stutters.
2)      We can aware stutters to have better attitude towards problem.We are not living in ideal world.We can’t let ourselves on the conscience of others.We can aware people that a PWS can do better even with his/stutter but it may help only at the time of hiring.Can you tell me how awareness will help a stutter at the time when a company will fire or wouldn’t promote  him due to his stutter???.At that time only legislature will work.there are two things one is for stutters to have better attitude about problem and other to avoid discrimination.TISA  helps a PWS to have better attitude about the problem but we still need a tool to avoid discrimination.
View 5: it is very difficult to predict whether a person stutters really or is faking it.
Reply :  I think its very easy I have to points to support my statement.
1)Government have to mandate all schools and colleges and schools from nursery to post  graduate level that whenever any stutter would leave school or college they have to provide him/her a certificate as a proof about his/her stuttering.Through out his/her studied a stutter will get  atleast 3-4 proofs regarding stuttering.Suppose a person want to fake to get benefit of stutters  than he/she would have to go to all schools and colleges to get fake proofs,and you know its not possible at all.Even if someone does that certificates can be easly identified because they wouldn’t look like 20 years old.

2)There can be very few people who can mimic stuttering that an stutter failed to recognize.If  someone is so good in mimicry than he/she would go to bolywood to become an actor or mimic  🙂 To recognize genuine stutters companies could hire stutters as HR professionals.One other  benefit is this it might increase demand of stutters in industry(what could be better than this).

Reply: Please read point no. 3 in view-5 reply.If we deserve we should go through.
View:7 I don’t want to be labelled as “Disabled.”

Reply : That’s it.Almost in all cases a stutter hesitate to accept stammering as disability because he don’t want to be labelled .We stutter take it to our Ego.I already explained in view-3 that people already consider as disabled they already consider stammering non-curable .When a person meet a stutter he never think that one day that stutter will cure himself(some people suggest us that do this or that it will be cured,but actually those are the who are unaware of stuttering) .I suggest we can understand stuttering better than others.

Story of a poor man.

A poor man in a village never applied for BPL (below poverty line) card because he do not want to be called as “poor”.He never applied for any government scheme for poor people because he thought  that it’s better to live in crises than that of being assumed as poor.What do you want to say about that person??..different people can   have different opinions about it..but thing is that He just pretended  to be rich or contented even he was not.

Same example is true for some of our fellow PWS.In our TISA group we believe that Stammering is “Incurable” but we can not ACCEPT it as disability although we often discuss on concept of ACCEPTANCE.Even technically and logically stammering is a disability but still we pretend to be alright.
View:8 “I see stammering more as a diversity rather than a disability. I am more inclined in seeing stammering as a “transfluency”, the term introduced by Cristobal Loriente, a researcher from Spain, and a pws himself. Transfluency means a speech which is not fluent. It does not identify it as a speech ‘impediment’. Why should we be looking for Sympathy and Pity rather than looking for recognition and opportunities?I feel it’s a step backwards.

Reply: Diversity does not affect someone’s life as stammering does.So we can’t consider it as diversity.If we talk about research of Mr Cristobal Loriente ,then I would like to say that There was no any need of such research in which after devoting so much time  a researcher come to a point that ”Stammering means a speech which is not fluent”. Mr Cristobal had to come to any stutter he would have told him that ”Stammering means a speech which is not fluent” .He just given a different name to the stuttering i.e Transfluency.So all his efforts was for to give a different name to the stuttering.?? We are not looking for sympathy or Pity,We are discriminated in different ways in the society, We just need a tool to raise our voice against it.Accepting the truth and raising our voice against discrimination is not a step backward. If still someone consider it I would like to say..”Daag lagne se agar kuch achhcha hota hai to daag achhche hain.”

G   Guys give your valuable opinions and suggestions about this issue in comment box.