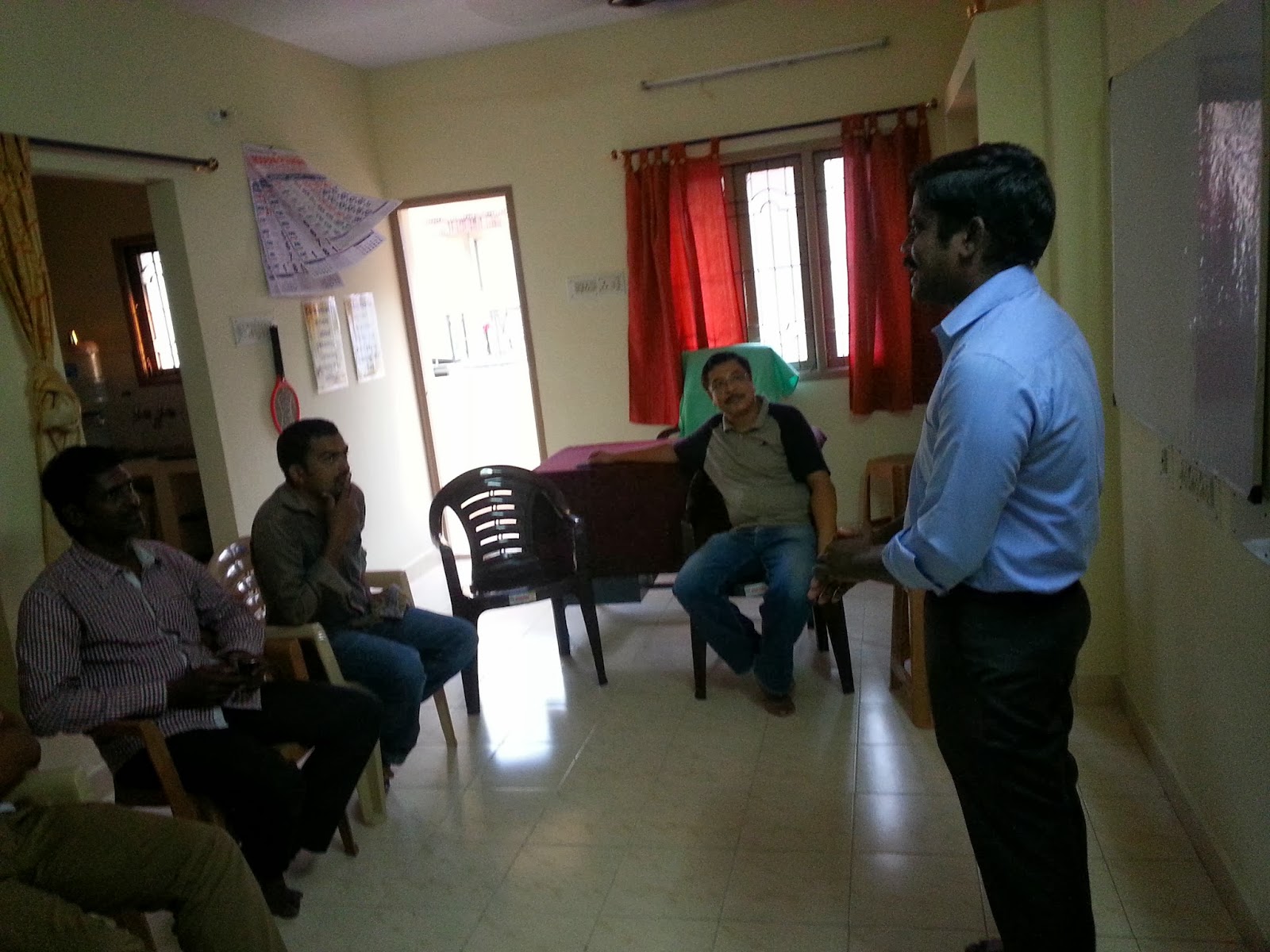 The Chennai chapter meeting
held on 2.2.2014 were attended by 8 pws. This time I asked everyone to speak on
any topic as per their wish and others would deliberately counter each one of
them. Everyone chosen their topic and while speaking, others started asking so
many questions. Vijayakumar talked about
the plight of the Agriculturists, who were not able to fix their product
prices, how the middlemen earning a lot, how the agricultural lands converted
into plots in Tamil Nadu. He also cited one example of comparing present price
of tomato and that of a few months back. One kg of tomato was sold about Rs.50
few months back and now it was selling a merge rate of Rs.8 per kg.  Imagine the plight of those farmers who put
so much of efforts but ended as a loser. But, everyone agreed that agriculture
was the most satisfying profession. Shanmugam, almost become
an ex-stammerer used to come to Chennai TISA centre 3 times a week to improve
his fluency in English. He has spoken about his relapse of stammering whenever
he was not able to achieve the sales target.
Sufiyan told two stories.
As he hails from Kerala, we asked him why not much industrial development taken
place there. He informed that it was due to strong political unions. One thing
everyone agreed was Kerala preserving its nature very well than any other state
in India. For this, one pws responded that most of the keralaties working in
the Middle East, sending sufficient money to their family and thus there was no
need for  Industrial growth at Kerala.
This is really a moot point. Shiek talked about “God is
everywhere”. He told that he was seeing everything as God and informed also that
this wasSUFI philosophy. He used to thank God for whatever he got (good or bad)
in his life.
Bijoy has informed that
his cheque deposited in a bank as repayment of loan and bank informed them it
was bounced back and he has to pay a fine of Rs.100. Bijoy after speaking to so
many bank officers came to know that his money was wrongly deposited in someone’s
account. But the bank still insisted him to pay the penalty. After literally
fought with many bank staff, the bank withdrawn the fine. Bijoy felt this as a victory
for his speech.
Bijoy also spoken about the nature’s splendor
at Maghalaya which he described as a mini Switzerland. He also informed that he
would make necessary arrangements at Assam for sightseeing. I told to him that
I was very interested in seeing North east states but because of fear, I was postponing
my visit.
Gnanasekaran, as usual gave
another beautiful lecture on “Back to Basics”, this time on LEARN TO LAUGH.
This we have to learn from kids. He informed that kids were laughing 500 times
a day. It is sufficiently good even we laugh at least 15 times a day. The sad
part is that on some days we never laugh even once. We have to learn to laugh.
Gnanasekaran has also informed that he had informed to his bank that he was
ready to take part in video conference next time, hitherto he was not agreeing
for. We all have given him a round of applause.
When my turn came, I
decided to speak on stammering, because we had not touched the subject once. I
asked the following questions:
1.    Is it good for a pws to learn more about stammering?.
Most of them replied negatively. I had explained my point of
view.  Those who wanted to serve for TISA
or any other stammering communities, they must update their knowledge. For
those who want their cure only, reading more and more about stammering was only
“UNNECCESSARY KNOWLEDGE” which will confuse them. The requirements of such pws
were to know basic facts about stammering, accept their stammering, find out
themselves which techniques were more suitable and practice it till such a time
that he was able to control 99% of his stammering.
2.    How pws can measure their improvements?
I explained that after 2-3 months of practice, the pws have
control over his speech. That is even if he stammers, he would not get afraid
and confidently continue their speech.. After about six months, the pws will be
comfortable with his stammering. He won’t use word substitutions and would
speak the words which he wanted comfortably. This way, a pws can measure his
progress.
After the meeting, I asked
Sheik, whether he was practicing any techniques?. He replied that as he himself
accepting his stammering and living at peace, there was no need for him to
practice. I was really shocked after hearing his reply. Most of the pws were
grossly misunderstood the concepts of “ACCEPTANCE” and “LIVING AT PEACE”.
For the better
understanding of the above two concepts especially by the youngsters, here
under I gave my actual advice given to Sheik.
“ Sheik, you have not yet
been married. The above two concepts are relative terms. It may apply to the
older pws like me, who settled in life. married 30 years before and my wife was
accepted my stammering long back, also economically sound and leading a
peaceful retired life. I can very well say that I have accepted my stammering
and living at peace with myself. But it is not possible for pws not like you.
You have to get  married. How do you know
that your future wife will accept your stammering; how do you know that your
children will accept your stammering;
Do you know how long your employer will accept
your stammering; how do you know that your employer will give promotions if you
going on stammering. Is it possible for you to live with peace yourself when
your wife, children and the employer are not accepting your stammering?. Moreover,
they were expecting you to deliver more for them when years passing by.
Now a days, this world becomes
a competitive one. A pws can accept your stammering and live at peace may be
possible only at villages and defiantly not at big cities like Chennai where
the competitions are cut throat one and humpty number of talents are available
to grab your opportunities. I know a few parents of pws, who borrowed loan from
banks for their wards education pressuring them like anything to get a good job
and repay the bank loan at the earliest. Because parents do not understand the
difficulties faced by the pws.
The logic behind
acceptance is to get rid of our emotional baggage, thus having more positive frame
of mind to tackle the stammering and more energy to do the practice. A major
mistake most of the pws doing are not practicing at all. It is very tough to do
small, small things for a longer period of time. But what other options they
got? You have only two options, ie either practice for one year (after
accepting your stammering) conquer your stammering and  make everybody happy and start living good
life  or live miserable & depressing
stammering life throughout your life time”.
After my advice, Sheik realized
his mistake and requested me to teach speech therapy. I teached the speech therapy
to him which I learned in the year 2001. Sheik has promised to practice it regularly.
That’s all from Chennai
chapter.
Share this
0 likes
Related Articles
1 Comment