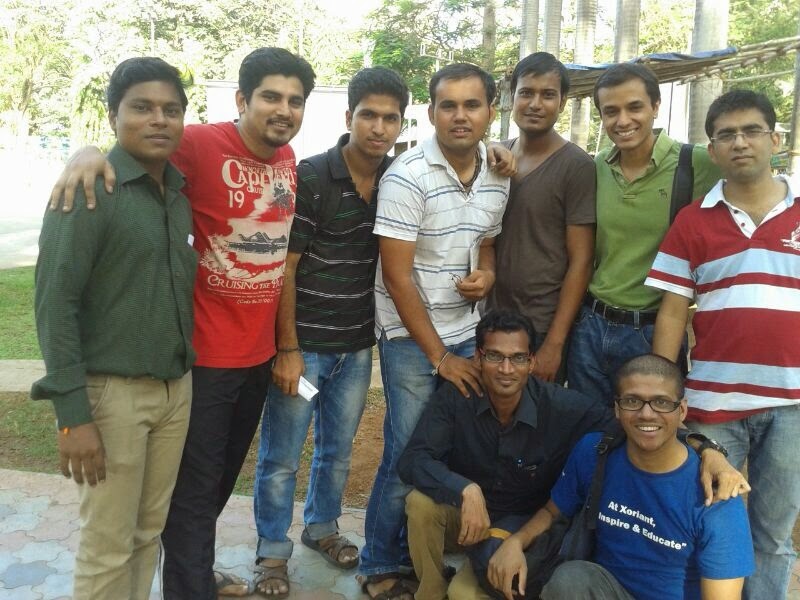 Hi Guys,
The SHG meet started at 1:30 pm, with the wonderful welcome speech by the Facilitator of the meeting, Bharat Soni (who chipped in at the last minute).  The facilitator then asked each of the role players to introduce themselves and their roles. The joke master Aditya shared a funny joke 🙂 There were some guests(one of whom was a 10 year old kid) and they introduced themselves.
This was followed by the learning session which was led by Dhruv. The group was divided into 4 teams. Each team was given a theme and they had to make a play/skit on that theme. It was great fun to see the acting bug come out of each member 🙂
After this was project presentation session, the project presenters, Jugal and Gaurav who gave some wonderful speeches. The speeches were then evaluated by the evaluators Dhruv and Aditya.
This was followed by the Impromptu speech session which was facilitated by Srinivas. Each of the members were given topics related to the theme I can’t…RIP, and they shared their ideas on the same.
This was followed by the evaluation of the speeches by the General Evaluator, Grammarian, Timer and the Technique counter. Finally, the role bookings were done for the next SHG led by Dhruv.
Regards, Kevin
As promised, here are the Positive thought strategies, we did skits on 4 of these today. You can find the skits from here uploaded to YouTube. You can watch them here:

Pick 1-2 of these, http://www.mtstcil.org/skills/image-3.html, and make them your mantra for a month. Keep on reminding yourself of this strategy, when you wake up in the morning, on your way to work/class, and while you’re having dinner. These will help you form new positive thought habits, which will help you realize…you CAN do ANYTHING!
Below is an excerpt from Apna Hath Jagannath that sums up why we should & how we can go about changing the stammering mindset. You can read more in Chapter 7.
Let us first understand a few basic facts about our brain. First, it does not hear (-fails to register-) negative commands and finds it difficult to obey them. If you say to your mind: you must not stammer in this interview, chances are your mind hears: you must stammer in this interview!(“Not” is simply dropped, ignored). This is why most therapies which directly or indirectly ask you not to stammer in pursuit of fluency, fail sooner or later. You suffer a relapse within weeks or months.
On the other hand, it is easier to get the brain to focus on a positive idea or command: In the above example, if you said to yourself couple of times- I must look in to the eyes of the interviewer and smile, Chances are high that you might actually do so and improve your over all communication. But being “positive” does not mean saying: “Who, me? No, I dont stammer. It is nothing. It is no issue at all- not for me.” The gap between being positive and running away(-denial-) from the problem through FEAR is rather fine. Living in denial and hoping that the interview will go fine on its own- is not being Positive. It is being unrealistic and foolish.

In psychological and speech laboratories we’ve uncovered evidence that stuttering is a conflict, a special kind of conflict between going forward and holding back – an “approach- avoidance” conflict. You want to speak but are torn by a competing urge to hold back because of fear.
Dr Joseph Sheehan


But practicing a positive affirmation in such a situation may not be easy at times if we have made a habit of approaching interviews with a long face and a thumping heart, as if we were going to face the death squad! This brings us to the second important fact about brain: Good habits are made the same way as the bad habits: through repetition over a period of time.

The third important fact in this connection is: you can change only what you are aware of. So developing awareness into the act of talking, listening, relating to upcoming presentation etc. is critical for success. But this cannot be an isolated exercise once in a while. You will succeed only if there is a round the clock awareness at maintenance level throughout the day much before the interview in question. In other words, being more conscious of our thoughts and actions, should actually work like an anti-virus scanner, resident in the computer memory and ALWAYS active in the background.
We also had a 10 year old boy attend the SHG along with his elder brother and parents. You can watch him, his elder brother and father perform in the skits. I was very nervous (we all were) to have the 10 year old boy attend the session. However, we tried our best to make an environment that is accepting of stuttering completely. This is the best way I believe to help children who stutter, by showing them that stuttering is okay, and encouraging them not to fight their stutter. As if we fight our stutter, we have blocks and it contributes to what many of us do as adult PWS. I believe it is easier to accept your stutter as a child. Of course you need a strong support network including parents, teachers, friends and a support group for children. I gave the parents some information about what they can do to help the child at home, like listening to him calmly, not interrupting or finishing his sentences, spending alone time with undivided attention, talking about stammering like it’s no big deal. I also gave them a sheet to pass to their teacher. I would like TISA in the future to launch a TISA Kids SHG initiative in all cities that are run by those who run the SHG. It would just a supportive environment for children who stutter that is fun with games and activities. What do you think is the best way to help children who stutter?