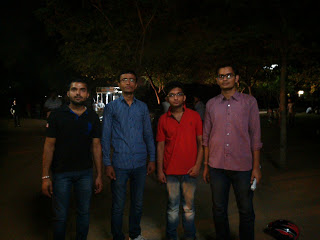 Hiii friends…
We had a wonderful SHG meeting this Sunday. We were 6 members – Abhinav, Chandraprakash, Omji, Anurag, Hemraj and me (Ravi). Abhinav was new guy but he looked quite enthusiastic.
We reached Central Park on time although I was quite late. From last 2-3 meeting we were discussing more and performing less. So this time we directly got on doing activities. We started by giving introduction and gave introduction using bouncing and prolongation. Bouncing was described by Chandraprakash and prolongation by Hemraj. Abhinav shared his experience of speech therapy. In the midst we were also having a discussion on stammering. And everybody took active participation in it. As Sachin Sir commented to do voluntary stammering, so I explained other members voluntary stammering and gave my introduction using voluntary stammering technique. Others members also got interested and I must say that they did it even better than me. Hemraj and Omji had to leave as they have some urgent work. Now we decided to do outdoor activity. We first approached a Korean couple that was sitting next to us. We asked them several question and the crux was, they took stammering very normally. That filled us with confidence and quickly we approached other two boys who were sitting nearby. They had no idea of stammering so we explained them. We then approached an Uncle and Aunty. We introduced us and asked them some questions. They gave us a compliment that we are doing a great job and suggested us not be feel ourselves less than others in any manner. They told us that the difference between a PWS and and a non-PWS is same as a difference between a taller and a less taller person.
Finally this made us that our meeting was a success. Then we thought of doing push-ups and I must say that this was the best activity.
oooooooooo…..I forget to tell the winner of Push-Up round in one go
Chandraprakash – 26
Anurag – 8
Abhinav – 16
& me (Ravi) – 36
So Congratulate me guys…hahaha….
Here are some of the pics……