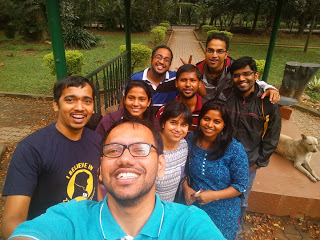 Anita was the first to reach the venue and welcomed rest of the group as they came by. We started off with the introduction round. The bread and butter of each person who has to do this in front of any stranger in daily life.

Next was the extempore , 2 minutes each, to speak on the topic of audiences choice. We know when we run out of words to speak in two minutes , the range of knowledge we have on that particular topic. Sharath gave the topic of “how to utilise your time in extempore” to anita which she tacked really well and was very informative. From next week onwards we got a checklist to cross , when we do extempore.

Group Discussion : Religions and Superstitions ( There were 2 lines of debate “Removing religion would remove superstition” and “Religions were one of the main inducers of superstition”). Due to the anarchy in the topic under discussion, the discussion turned into a fire fight wherein the fighters had no clue on which side they stood. It was good fun to watch teams being split and united amidst arguments. It was 2(Jonali,Sharath) vs 6(rest) in the beginning and it evened out as the debate progressed.
Lesson Learnt from the episode was that the topic must be crystal clear before the teams begin their arguments. In the end we came to a conclusion that indeed religion currently pla

During general discussion the topic of singing came up and why people don’t stutter while singing. We deferred activity with singing techniques for upcoming weeks. Soma sang a song to show how our voice remains crisp and fluent while singing.

Block and Tackle: Teja started this mind boggling presentation technique where the presenter has to change his view of the topic from positive to negative and vice versa at the discretion of the audience.
For Instance: If you start the speech with appreciating flowers, you will be made to speak the opposite in the middle of the speech and you have to speak by degrading the flowers. This carries on and the audience changes their stance with no hesitation. The speakers mind has to break the train of thoughts and start a new approach. This exercise, stimulates the creative part of the brain

In the End we had Energising Activity by Soma which she learnt from NC . Banana Cut!! Cut !!Cut !!!!.
We all shook our leg to her beats and took farewell from each other.

Thanks and Congrats to Mohit for coordinating the Shg – his first 🙂