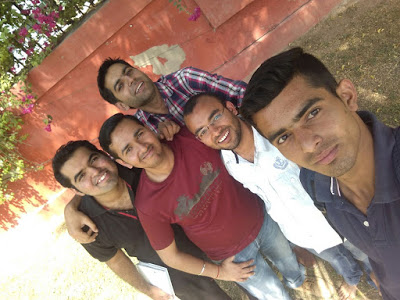 The meeting was held at Jantar Mantar in midst of sunny environment with cool shade. The meeting started at 11:30 am (Although the Host Dixit was on time at 11 am). The meeting was attended by Dixit, Vikas, Anshul, Suraj, Atul and Shailender.

The meeting started with introduction round where everybody gave their introductions. Vikas and Dixit used a new technique of telling about what happened in the past week along with their normal introduction.

After Introduction round, we moved to Impromtu Speaking or Table Topic session where each participant has to speak between 2 to 3 mins on topic given to him by fellow participants. The host gave introduction of every speaker with a very good use of pure Hindi. The topics varied from E-commerce industry, MNC Culture, Virat- Anushka Chemistry, to getting married to a mermaid. Everybody speak very well especially Atul for his body language, Vikas for his humor, Dixit for his on the spot thinknig, Suraj for being too much logical, Anshul for confidence and Shailender for being easy on stage.

Then we started a group discussion where anybody in the group can ask question to anybody and fellow participant tried to create pressure on the person who has to answer the question. The pressure was created by interrupting him or denying his logic or belief. The aim was to create a stressful situation.

In this round, Everybody was asked to give feedback about the each participant and about the meeting in general. After the person regarding which feedback is given was to comment on the feedback received. The summary of feedback is given as follows
Vikas
Dixit
Anshul
Shailender
Atul
Suraj
Meeting Feedback

After the feedback round, Groups were made of 2 and 3 people. The particpants were asked to make 50 contacts but because of over shooting of time, every participant could only do 10 contacts. So members disassembled at around 2:30 pm.
Looking forward to Next Delhi SHG Meeting 🙂
Share this
0 likes
Related Articles
6 Comments