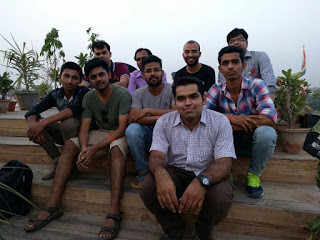 NOTE: This repost is written by a very special Person. His name is Anshul Saini. It is his first report which he wrote. Infact he has used MS Word for the first time to write this report. The report contain some grammatical error but that is far outshined by content of report and dedication shown by Anshul in writing it. I have not touched the report because I wanted to preserve the ingenuity and hardwork put by the person in report.

Once Again Kudos to Anshul and salute to your determination and contribution to Delhi SHG and TISA.

Here is the Report !

Role play by Suraj Kr. As a Host, Anshul Saini as a Co-host,
Vikas Ranga as a General evaluator, Vishal Gupta as a Technique and feeler word
counter and Sheetal Saini as a timer.
Meeting theme was Make you feel special.

After the start of meeting one question is asked by Host that
why you have to need yourself feel special. Some members said that to overcome our fear and to increase
our confidence.
After this we start up our meeting with 5 minutes
meditation. Host told us about ground rules like one person speak at one time,
don’t complete other’s word, listen all to carefully and one new rule added by
Vishal Gupta was raised your thumb when anybody passed his block with or
without technique.
Meeting had five activities:-
1. Quick interview round:- like always Vikas Ranga added something
new, keep smiling & pass your block in funny way.
2. Speaking Aero plane:-Host told to everyone that make a
funny drawing and you have to speak about this drawing for 1-2 minutes. After
finishing the drawing the host gave us a pleasant surprise. He told us that
make a aero plane of this paper and throw it to that person whom you want to
speak about it. Everybody made a well story on drawing.
Funniest drawing was made by Vishal Gupta and funniest story
by Aashish. In this activity when Kuldeep had some problem to explain story
then host explain that story with voluntary stuttering and motivated him.
3. Guzzling the story with technique:- This activity is
hosted by Anshul Saini (co-host). In this activity one person had to speak 30
seconds or 1-2 sentences. Everybody made it as funniest as possible.
4. Stammering Interview Round:-Host had some copies of a
question paper about stammering which had 10 questions.  Members were divided into 6 groups and in
each group both member asked 10 question to each other.
5. Make someone feel special: – This activity also hosted by
Anshul Saini. In this activity everybody had to tell some great qualities of
any PWS.
At last Vikas Ranga (General Evaluator) told about everyone
and gave their valuable advice. Vishal Gupta (Technique & Feeler word
counter) told to everyone that which person used what techniques and how many
times and what were their feeler words. Suraj used highest times many
techniques like bouncing, prolongation and voluntary stammering.
Some qualities of new comers:-
1. Kuldeep-complete their words and
sentences, Not used any substitute and feeler words.
2. Aakash-Not speak fast and not have any
secondary symptoms..
Share this
1 like
Related Articles