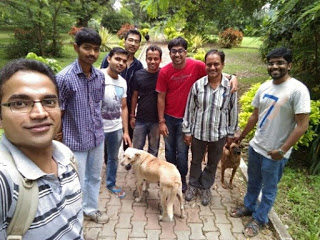 It
was another fine Sunday morning. Rajkumar(Myself), Subrath, Amarnath, Hari Krishna
and Sudanshu were gathered in small hut. We were waiting for our
co-ordinator(Ravi teja). Hari Krishna started the meeting with introductory
round. Subrath introduced himself as a software engineer working in an IT
company near hebbal. Amarnath is a civil engineer and Sudanshu is working in
Samsung. Hari Krishna works for BEML.

Introductory
round was followed by prepared speeches from sudanshu and Hari Krishna.
Sudanshu
gave his second toast master speech.  His
topic was on anger management. It’s an odd topic for a soft person as him. He
discussed various scenarios that cause anger.

Situations like getting stuck in traffic
while going to work, being in company of people who we don’t like. He also
added how it affects our social and mental life. He also suggested several ways
to control anger. To prevent we have to avoid situations that cause anger.
Taking deep breaths in such situation will reduce stress level.

Hari
Krishna gave his first ice breaker speech. He titled his speech as ‘Blue wagon’.
It was a story of a boy who was born blue, who found himself unique from his
friends due to his speech. He was so fond of rail wagons which pass by his
home. He narrated how life similar to a rail wagon has shown him a journey,
from being an introvert school kid to someone who helps his society as a
mechanical engineer.
This
was followed by impromptu speeches.
At
this time, Ravi teja entered the scene, rejoicing us with his humor.
Subrath
was given a topic “If you were to meet someone in the past who would it be”. He
recalled how much he loved being in company with his grandfather as a kid. He
expressed with sadness how much he missed those days.  This was followed by topics like “Beach
party” in which amaranth admitted he has never been in one. He was able to imagine
it as a soothing experience with calm breeze, sound of waves and enjoying the
company of so many people.
At
the end of impromptu speech, We had two new members – Ravi sharma (inspector in
customs dept. ) and Pratheek, a visitor from Mumbai SHG.
Ravi
Teja came up with two activities. First one was we have to divide ourselves in
groups of two and make conversation among us. But the condition is we had to
stand as far as possible. (One near small hut and other near entrance of
corridor) So we had to shout. This attracted attention of passerby.  Second was we had to shout in the sequence of
increasing pitch. Both of this activity was focused on strengthening our voice
and overcome our stage fear.
The
meeting ended with a group story telling round.
Our
visitor, Pratheek compared his SHG group with Bangalore SHG. Their activities
were similar to ours with additional acts like voluntary stammering, dramatics
and yoga. He appreciated the co-ordination of meeting and added he enjoyed all activities.
Share this
0 likes
Related Articles