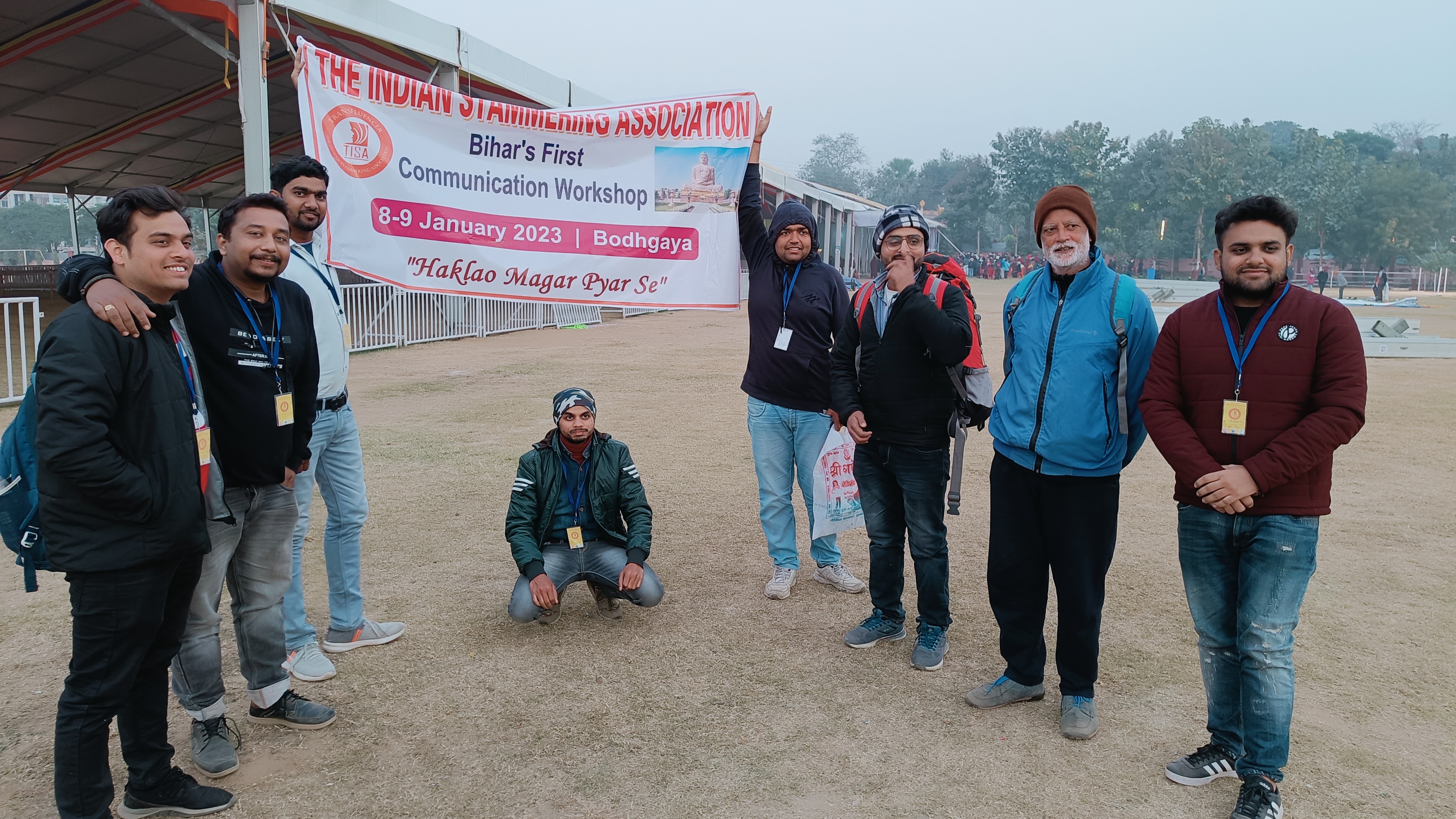 Twelve pws explored concepts and techniques related to stammering, besides bonding and exploring this town, famous the world over for religious tourism. The two-day workshop was led by Dr Satyendra Srivastava, a social worker, and a counselor.

It began with a ten-minute guided mindfulness meditation, followed by a discussion on the relevance of meditative practices in life in general and communication in particular. One of the participants has registered for a Vipassana session coming up soon. Next, we had formal introductions followed by Power Intro, a concept from Positive psychology, wherein participants has to identify and use a word to denote their strength and use it as an epithet, to their names. The idea was to encourage pws to focus on their strengths instead of weaknesses all the time.

After a quick discussion about expectations from the workshop, we discussed the NATURE of stammering and used THREE models to explain it: Approach Avoidance conflict, Stammering Iceberg, and Transfluency – a concept based on the diversity model. It was understood that a pws is FREE to see his / her stammering in different lights and ask himself: which model puts me more in control of my stammering and recovery from it?

Next, we discussed the “Motherboard” metaphor to understand the differences between a stammering and a “normal” brain. It was followed by the role of social interactions in the development of adult stammering – secondary symptoms, negative thoughts & feelings, poor/maladaptive coping mechanisms, etc.

Then, we had a round of impromptu speeches from a raised platform in the Kalchakra ground. This highlighted the beneficial effects of using louder volume and pausing plus other body language skills- standing straight but not like a wooden prop, light-house effect, etc.

Post lunch, we interviewed strangers in pairs; The town was full of tourists from different countries. We met some interesting people and learned about their worldviews. We used the techniques and negotiated with some shopkeepers too, as a communication challenge. We met a young Tibetan photographer among other people. Thereafter we discussed the four techniques- beginning with a round of Voluntary stammering. Next, we reviewed our experiences with the stranger-talk rounds earlier, summarising how to approach a stranger and talk with his / her permission, etc. We discussed the use of positive and assertive body language, communication as a broader framework, and the role of listening in various situations. The last event was sharing an embarrassing event related to stammering and analyzing it in the light of what we know now. Normalizing past sad events, through discussion, is an important part of recovery. A participant noted that Smiling is the first response to ambiguity in most cases- and therefore should not be misunderstood by a pws. 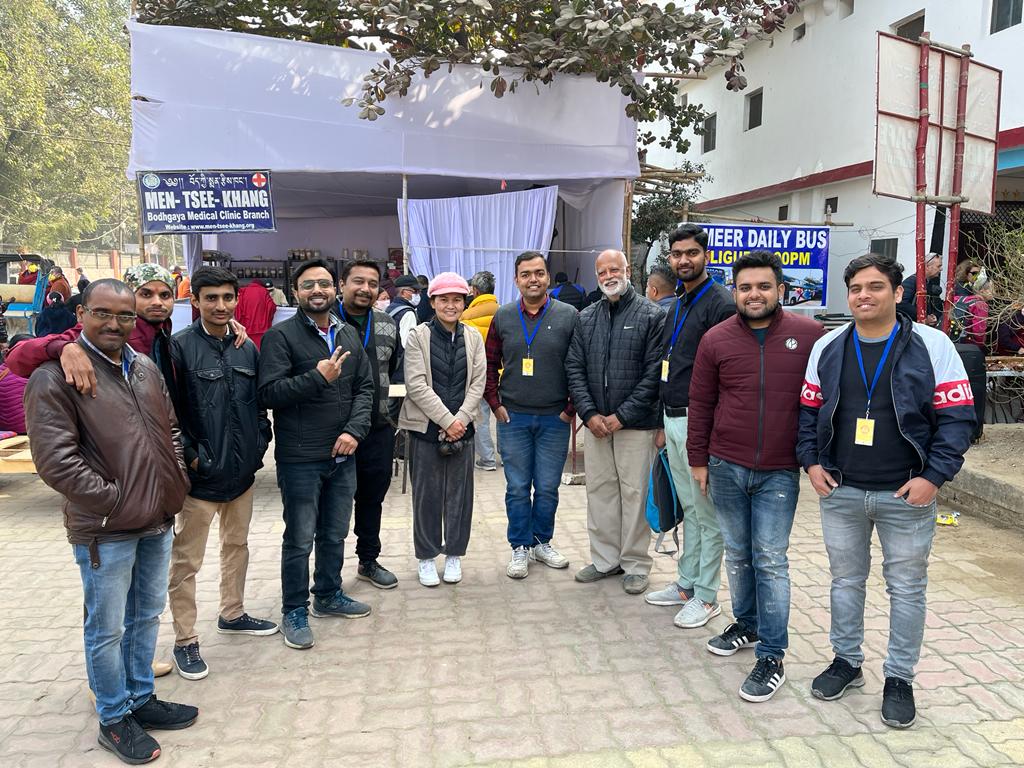 Feedback was given by the participants about the two videos assigned as homework on the previous day:

Next, we discussed and practiced pullouts and cancellations. A role play (a classroom scene) followed on the sidewalk in the market, which was enjoyed by the passers-by. We did it in the public instead of the meeting room in the hotel, to make sure that the participants felt the challenge and learned to rise above it – and also to enjoy the sun! A young Ladakhi man and woman joined us and asked random questions to participants one by one. They also invited suggestions to keep in mind while talking to a pws. Simultaneous feedback was provided to the participants by Dr Srivastava on their communication style and content. A QnA session followed it. Participants asked some deep and searching questions.

One doubt was: why do we teach the same techniques in the workshops? The answer was: Knowing too many techniques and not being proficient at any is the main problem that holds pws back. Secondly, there is a huge area, beyond techniques, which needs to be explored in every workshop. Lastly, some issues are so important (the hidden part of the iceberg) that they deserve much repetition since few people are able to grasp them and transform their lives in one go.

Post lunch, we visited the Mahabodhi temple, the main attraction, interacting with international pilgrims. Back in the meeting hall in the hotel, we discussed – Neuroplasticity, Growth mindset, and closed-ended practice – and their implications for long-term recovery.

The participants were also encouraged to share their long-term life goals. Not many participants had a clear-cut idea of where they hoped to land in life. Obviously, we need more time and exposure to cultivate such ideas.

Then, an important discussion took place about the Patna Self-help group and how to strengthen it – and how it may host a national conference in the coming years. Many ideas came up for discussion and it was acknowledged that we must make haste slowly. After a feedback session, we thanked each other, clicked some photos, and dispersed.

The group has decided to keep in touch over social media and to meet once in a while physically somewhere within the state. Some old members have moved out of the state, for higher education/employment. The group needs to recruit new members and for this, they will be reaching out to schools and therapists in the state hospitals.

Solitude (A short story) The old man was again in the church today at his regular time. He quietly comes in and sits in one of the pews...

Hello friends! 😊we are glad to announce that there is two days communication workshop which is going to be organised in Bodhgaya...

Many pws join TISA and want to play a bigger role than just a member. They want to contribute. Mooc 2 is an opportunity for them. But...